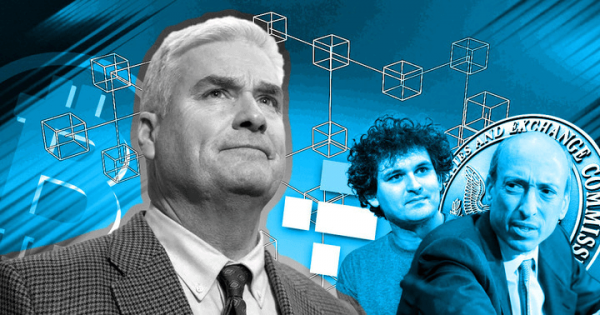 Techspace - Both the former CEO of FTX, Bankman-Fried, and the head of the Securities and Exchange Commission, Gary Gensler, has been called out by Representative Tom Emmer of Minnesota for their roles in the collapse of FTX the subsequent consequences.

Emmer stated this during a show on Tuesday night on Fox Business. "This is not only a failure of FTX," Emmer remarked. It is a failure of centralized finance, as well as a failure on the part of Sam Bankman-Fried.

The congressman was also critical of the Securities and Exchange Commission for not conducting investigations into nefarious participants in the cryptocurrency field. When numerous cryptocurrency companies, such as Terra Luna, Voyager Digital, and Celsius, went out of business, Emmer questioned what the regulatory body was doing about it.

Instead, he accused the Commission was engaging in "backroom agreements" with the bad actors in the community while simultaneously investigating and punishing the good people in the society.

The newly appointed Republican majority whip in the United States House of Representatives has condemned the failure of business ethics, government oversight, and regulatory procedures concerning the collapse of FTX. He pointed to a meeting on March 23 between Bankman-Fried and Gensler.

The congressman directed most of his ire toward the chair of the SEC, saying that investigating these companies is what Gensler is supposed to be doing and asking where he was on Voyager and Celsius, Terra Luna, and more recently on FTX. The congressman also said he would personally investigate the SEC chair. The congressman then inquired why the head of the SEC was targeting "positive actors" in the community while working on what he called "a backdoor deal" with those engaging in illegal activity.

According to what he indicated, Sam Bankman-Fried was trying to have preferential treatment legislation passed in Congress. "And when it was ultimately disclosed what it was, and the industry started raising red lights, that's when this thing started falling apart," the author says.

Read Also: The Battle of These Two Crypto Giants Comes to an End

FTX submitted its petition for protection under Chapter 11 of the bankruptcy code on November 11, 2022.

The Ontario Teacher Pension fund was one of the numerous organizations that were negatively impacted by the failure of FTX since it had more than $95 million invested and could not withdraw it.

According to the organization, the investment will have a "limited influence" on the strategy because it only accounts for 0.05% of the company's total net assets.